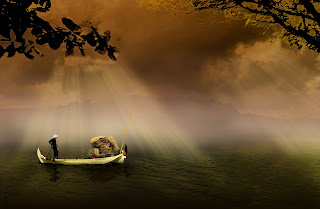 In this world where we live or where we are around. I believe we all are fisherman and fish at the same time. As Charles Darwin said it only depends upon the favorable conditions and adaptability to change a prey to a predator and vice-versa.

In this abstract writing, I just want to share the things that I have seen and noticed all around me. If it will be worth reading then it would be great.

In the small coastal region town, somewhere around the globe were 3 people who chose the common profession as a fisherman. They were  Krish, Omar, and Yash.
Krish had a family of 7 members which included his mom, dad, a loving wife, and 3 kids. He was a very hard working as well as the smart guy who knew all the tricks and tunes of fishing. He had a family he had to fish more often as a profession requires hard work and luck.
Omar also had a family but of 3; Loving wife and an infant. Fishing was one of his hobbies and turned to a profession lately.
Yash was a happy and blessed person as he was single. But had a mom, dad, and sister to take care of with a very broken background.
They had all the appliances to fish in the sea. Just the difference was the place where they fish. Krish loved the peaceful place so he used to fish a bit far from the shore. Omar loved the greenery so used to fish in the places where there would be trees around or the bushes with sweet songs of birds. Yash didn't mind about the place he used to always think about the harvest. The things in common among them was the sea, profession and the market where they sell the harvested product.
Krish used to focus on quantity of the product he believed on catching more fishes to earn more money, Omar used to focus on quality on catching expensive fishes and Yash didn't mind any of these he was happy at any terms. He caught in quantity he was happy he caught in quality he was happy, he always focused only in one thing that was he never sold the mother fish which is if he caught the fish which would bring him all the money of single day catch but was full of eggs he would not think twice to release it.
Time went by as all were happy in their profession. Slowly market changed, the concept of fishing changed. Bigger Companies started to focus on fishing industries. The market and the harvest became more competitive. The gadgets they had was not enough for fishing as the big companies had big ships for harvesting and used huge nets, more people to yield more product. Slowly the local government saw fishing as the income source and developed laws and order to maintain while fishing. People fishing single handed wasn't allowed to fish in the same sea anymore for security reasons. Entertainment business was developed for fishing by the government. Funny thing was the tag line they used "Fish like a Professional Just in  199 an hour". All the concepts were running so cool in-fact great. The market forgot those three fishermen completely. They were the only source of fish in the town once. None of them (Krish, Omar, and Yash) were believing in all this shit happening. Within a year the whole thing was changed. Needed to start for the scratch again. There was no situation to accept or the explanation came. There was nothing but just the emptiness. No sound of a mini-boat anymore. No people gathering around when they open the box of harvest. The empty stomach and a deep cry inside which no-one could hear. Fish Business had been personalized now. People would get on the order of fish in their house. Everyone was so happy that no-one cared.
Finally, all three realized the time has come to step out of the box before the box would close for good.
Krish remembered all those days he used to single handed run his family and how things changed slowly as his wife had to start to work in the FieldsBurg Fishing Company. How she tended to be the breadwinner. How his position changed in society as well as in the family. Need to do something right, Luckily Krish got a well-paid job as a deep sea fisherman in the same company where his wife worked. It took time but the family stood up again all started being well. But no-one every asked how is Krish feeling he smiles, he enjoys the progress of his kids. he watches tv shows with his parents, goes out for dinner with his family and he is still a fisherman..........

Omar could see his son growing and trying those dried packed fish from a brand Fish are Us and how happy Denial (Omar's Son) is with the flavor of it. It's time for Denial to join kinder garden now. Need to do something, Omar started to make people professional fisherman for an hour. Omar loved the greenery now his stall and boat are full of fake leaves and bushes. Speakers give the sound of birds and the waves. He has become the best entertainer and trainer of-course it was his hobby come profession. He has a nice lifestyle and Denial studies in the most expensive Kinder Garden now. And the most interesting thing is people call Omar the happiest person on the planet.........

Yash knew nothing what to do except fishing and was completely broke. His sister started to work on her own and life for herself. He was the one who used to fix everything now he was seeing everything being broken, he knows all those scars in the past and the cracks developed in the present. The feeling of couldn't do nothing gives more pain then the cracks and the broken heart. Yash realized he knew nothing in the past as well. Never focused on quality of harvest neither the quantity and didn't even mind about the place of harvest then what he knows. He couldn't find anything inside him. Food had to come to home so he worked what ever came in his way. He knew Krish when he did a month deep sea fishing. He knew Omar when he distributed Omar Fishing Expert Flyers all around the town. Basically, Yash had no-where to go and nothing to become. He couldn't see any path. Was lost and lost for months and years. Finally, the fish-egg theory rocked on his head one day. Now he has his own mini sea just people call that Yash Fisheries where he still fishes but now he care both the quality and the quantity of his harvest. People come to him to get fresh and alive fishes. Some people even point to the fish they want in the water and Yash fills he is the happiest person to catch the one for them. But the society calls him stupid and will always do. You know what the good thing is he still doesn't care about the place.

Thanks for reading. Will be back soon.

By Core Of A Day February 18, 2019
7 Qualities For Being A Freelance Writer Hi, Team Core How are you all? "7 Qualities For Being A Freelance Writer" is all about the skills required to be a Freelance Writer. This segment is for those who want to know what is freelance writing as well as what are the qualities required to be a freelance writer. Maybe those qualities are in you. If you have these qualities you can definitely be a freelance writer. I personally will be very happy if this segment can help even 1 person to know their hidden skills. Who is a Freelancer ? Freelance is the type of work done as per assignment for a company or individual without directly involved in the project given. In an easy word its working for someone without being their employee. Freelancer : A Freelancer is an individual/self-employed person who does freelance work for anyone or any company with the provided amount of time frame and desired payment.  In this modern world, any assignment or project can
4 comments
Read more

By Core Of A Day January 10, 2019
Travelling and Freelance Writing Hi, Team Core How is Everyone? Today lets talk about the interrelation between Travelling and Freelance Writing . I fell like everyone loves traveling  and each traveler can do freelance writing at least regarding the journey and the experiences they have had pre-journey, during it and after the journey. The best result of freelance writing comes basically with 7 main qualities: Mental Multi-Tasker Persistent Doggedly Determined Self-Motivated Humble Expertise Confidence And all their features resemble traveler and their qualities. I will definitely try to elaborate on these qualities on my next segment  " 7 qualities for being Freelance Writer " .
Post a comment
Read more